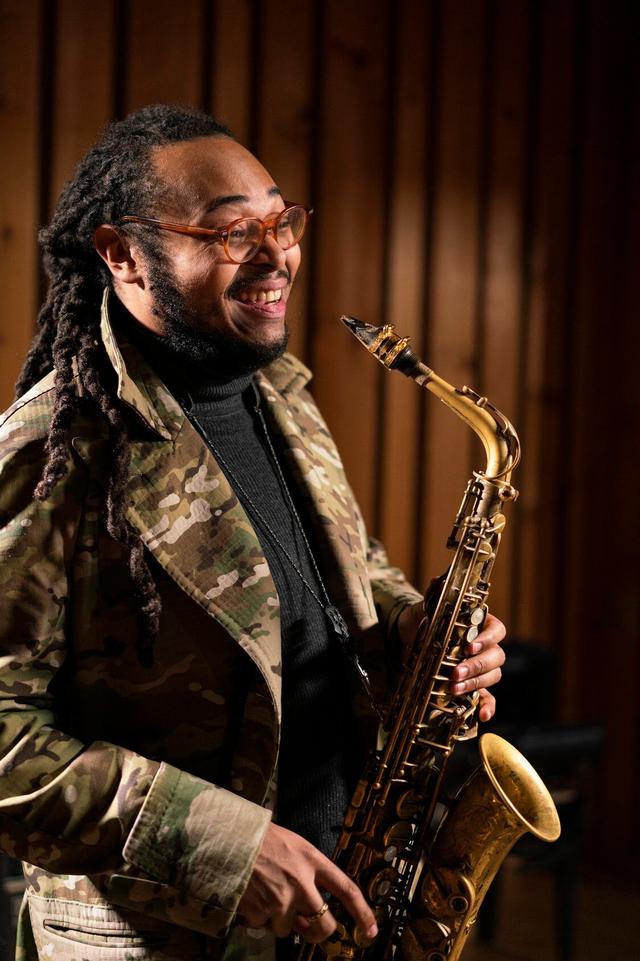 “Anyone trying to tune into the present moment in jazz could do a lot worse than starting with Immanuel Wilkins, an alto saxophonist whose playing is at once dazzlingly solid and perfectly lithe” –New York Times

Immanuel Wilkins is a saxophonist, composer, educator, and bandleader from the greater Philadelphiaarea. While growing up, Wilkins honed his skills in the church and studied in programs dedicated to teaching jazz music like the Clef Club of Jazz and Performing Arts. After moving to New York in 2015, he proceeded to earn his bachelor’s degree in Music at Juilliard (studying with the saxophonists Bruce Williams and the late, great Joe Temperley) while simultaneously establishing himself as an indemand sideperson, touring in Japan, Europe, South America, The United Arab Emirates, and the United States and working and/or recording with artists like Jason Moran, the Count Basie Orchestra, Delfeayo Marsalis, Joel Ross, Aaron Parks, Gerald Clayton, Gretchen Parlato, Lalah Hathaway, Solange Knowles, Bob Dylan, and Wynton Marsalis to name just a few. It was also during this same period that he formed his quartet featuring his long-time bandmates: Micah Thomas(piano),Daryl Johns(bass)and Kweku Sumbry(drums).

Being a bandleader with a working group for over four years has allowed Wilkins to grow both as a composer and as an arranger — and has led to him receiving a number of commissions including, most recently, from The National Jazz Museum in Harlem, The Jazz Gallery Artist Residency Commission Program (A collaboration with Sidra Bell Dance NY, 2020 ) and The Kimmel Center Artist in Residence for 2020 ( a collaboration with photographer Rog Walker and videographer David Dempewolf). Being emerged in the scene at a young age and sharing the stage with various jazz masters has inspired Wilkins to pursue his goal of being a positive force in both music and in society. This includes quite an impressive resumé as an educator. In addition to teaching at NYU and the New School, he has taught and given master classes and clinics at schools/venues like Oberlin, Yale and the Kimmel Center. Ultimately, Wilkins’ mission is to create music and to develop a voice that has a profound spiritual and emotional impact.

By studying the humanity and the cultural specificity of jazz, Wilkins aspires to bring people together through his art. His debut recording, Omega —produced by Jason Moran— was released by Blue Note Records in 2020 and has received uniformly rave reviews. In addition to being voted “Best New Jazz Artist” in the JazzTimes Critics’ Poll and “Best New Talent of 2020” by Musica Jazz, Wilkins’ Omega has appeared on numerous “Best of 2020” lists — most notably,” it was named NPR Music’s “Best Debut Jazz Recording of 2020” and the New York Times number one Jazz Recording of 2020. Wilkins began 2021 on a very positive note. He was nominated for a NAACP Image Award (Best Jazz Instrumental album) and won the prestigious LetterOne Rising Stars Jazz Award.