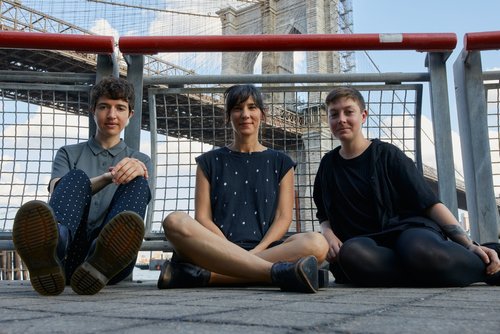 …of Late, is the third release for the J. Pavone String Ensemble, an unconventional trio consisting of Pavone on viola, Abby Swidler on violin and viola, and Aimée Niemann on violin. Founded in 2017, they present original compositions that expand on the themes of Pavone’s extensive solo work for viola while incorporating recent research into the effects of sonic vibration on human physiology and emotional health.

Pavone’s solo viola music, which stems from years of concentrated long tone practice and an interest in repetition, song form, and sympathetic vibration, is Influenced by the ‘folk song’ which lives largely through oral transmission. Each performance of the piece may be unique, which reflects the indeterminacy of Pavone’s output for solo viola; her folk music.

Providing the groundwork for her compositional language, she created the string ensemble as an outgrowth. The compositional techniques borrow from and elaborate on traditional music notation. Pavone experiments with improvisatory techniques, alternating between metered and time-based scores and improvised and notated instructions. Specific sections allow the freedom to move between sounds at the performer’s chosen rate within given parameters. In this way, the musicians develop the skill of responding to a score and a performance space as well as to each other. Through the spaces that are left open within the structure of each piece, the musicians re-create the work together during each performance. Sustained pitches and clusters of ensemble sounds generate specific physical and cognitive benefits intended to impact the audience physically and mentally, existing within and beyond music’s canonical role.

The ensemble approach focuses on a vision of collective improvisation that prioritizes a collaboratively sewn musical fabric, in contrast to the traditional improvisatory method that prizes the individuality and uniqueness of the soloist. The rehearsal method, influenced by her solo work, attends to how the body plays a role in sound and intention.

The group has performed at Black Mountain College Museum+Arts Center in Asheville, NC; the 2020 NYC Winter Jazzfest; the GARNER Art Center in Rockland, NY, Firehouse12 in New Haven, CT; Roulette and ISSUE Project Room in Brooklyn, NY; and The Rotunda in Philadelphia, PA.

In 2019, the string ensemble’s debut album, Brick and Mortar, was hailed by the Chicago Reader’s Peter Margasak as “the most assured, bracing work of Pavone’s career.” Astral Spirits Records released their second, Lost and Found, in 2020 to critical acclaim from publications such as; The Wire, The New Yorker, NYC Jazz Record, NPR, Jazzwise, and was named a “Best Contemporary Albums of 2020” by Bandcamp Daily. Chris Ingalls from Pop Matters described their music as “too stunning to lump into genres.”