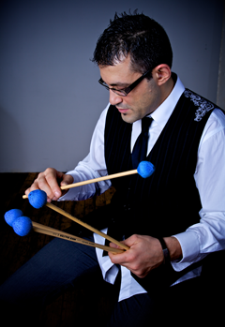 Born in Kozani, Greece, Christos Rafalides can’t remember a time when he wasn’t surrounded by music. The influence of his older brother led him to the piano at the age of seven. He began his studies in classical percussion at the age of fourteen, and by the time he was twenty he was working with some of the best known orchestras in Greece. Christos believed he would continue his career as a classical percussionist, until one evening when he heard pianist George Cables with the group of Billy Cobham, “here was this guy, playing with his shoes off, conveying so much feeling through his instrument… I knew I wanted to be able to express myself like that.” From that moment forward, Christos knew he would be a jazz musician. Christos moved to Boston, where he completed his Bachelor of Arts degree, and continued to New York City to study with acclaimed jazz vibraphonist Joe Locke at the Manhattan School of Music. He began to immerse himself in the vital NYC jazz scene playing with such notable musicians as Ravi Coltrane, Antonio Sanchez, and Donny McCaslin, among others. He established ‘ManhattanVibes’ which reveals his strong affinity for Latin and other world music.