A POWERHOUSE TRIO comes to the Side Door Jazz Club for a very special weekend of intimate, world-class trio jazz! 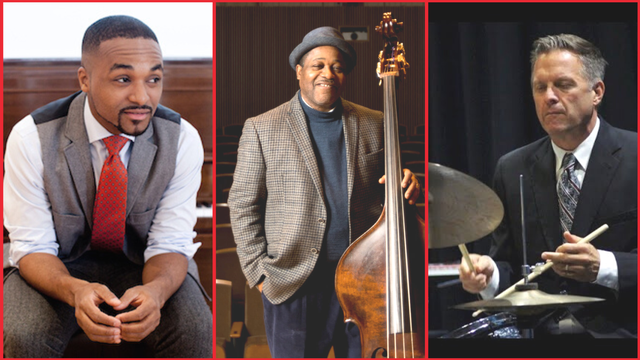 Sullivan Joseph Fortner Jr. is a native New Orleanian who has already made a significant foray into the jazz world that belies his young age. While touring with Stefon Harris & Blackout, Christian Scott Quintet, and the Roy Hargrove Quintet, Sullivan completed his Master’s degree in Jazz Performance at Manhattan School of Music under the tutorage of Jason Moran, and Phil Markowitz. He holds a Bachelor’s degree in Jazz Performance from Oberlin Conservatory of Music. Sullivan began playing music by ear at the age of seven. Two years later, he was playing for church choirs throughout New Orleans. By the time he was 11 years old, Sullivan had won a Cox Cable “Amazing Kids Award”. At the age of 13, Sullivan furthered his formal education in piano by attending the New Orleans Center for Creative Arts (NOCCA) and earned scholarships to several prestigious summer jazz programs, including the Vail Jazz Institute and the Skidmore Jazz Studies Summer Program. A standout on the stage and in the classroom, Sullivan was Valedictorian of his high school class while simultaneously graduating from NOCCA. He has studied and performed with many great musicians, including The Marsalis Family, Donald Harrison, Nicholas Payton, Billy Hart, Gary Bartz, Marcus Belgrave, The Jordan Family, Irvin Mayfield, Peter Martin, Dave Liebman, and a host of others.

Rodney Whitaker is one of the hardest working and swinging bass players on the scene and has recorded with great musicians such as Roy Hargrove, Pat Metheny and Wynton Marsalis. Featured on more than 100+ recordings — from film to compact discs — Whitaker’s film scores, China, directed by Jeff Wray, was released on PBS Fall 2002 and Malaria and Malawi, released on PBS Fall 2010. Also, Whitaker has a DVD release featuring Michigan State University’s Jazz Department entitled, “Inside Jazz”. In 2011, he was nominated for an EMMY for the ‘Original Music’ category, “Malawi and Malaria: Fighting to Save the Children” produced by Robert Gould and Sue Carter.