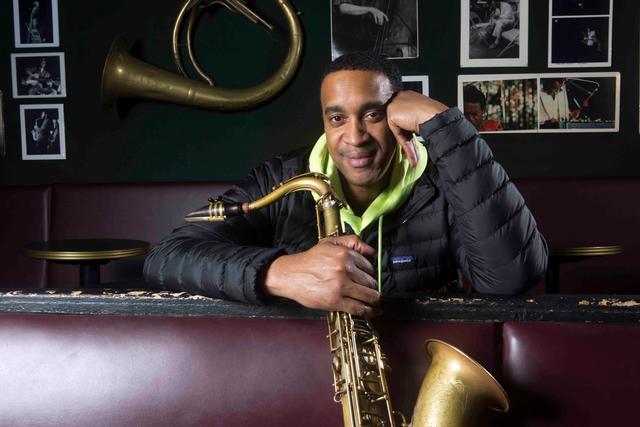 A former band member in Art Blakey’s Jazz Messengers, Jackson is steeped in the tradition and a torch-bearer of jazz and saxophone history.

Born on June 16, 1965 in Carthage, Missouri, Jackson was raised in Denver, Colorado and chose saxophone at the age of 10. At age 16 he switched from alto to tenor and later enrolled at the University of Denver before spending part of 1985–86 at the Berklee College of Music in Boston. He left Berklee in 1986 to join Art Blakey’s Jazz Messengers, where he later played alongside pianist Benny Green, trumpeter Philip Harper, trombonist Robin Eubanks and bassist Peter Washington. Jackson remained a fixture in the Jazz Messengers until Blakey’s passing in 1990.

In 1991, Jackson made his recording debut with Me and Mr. Jones, featuring James Williams, Christian McBride and master drummer Elvin Jones. He joined Jones’ group in 1992, appearing on the great drummer’s albums Youngblood and Going Home. Jackson’s1994 Blue Note debut, When the Time Is Right, was a straight ahead affair produced by iconic jazz vocalist and bandleader Betty Carter. His subsequent four recordings for the Blue Note label through the ‘90s were produced by Craig Street and featured wildly eclectic programs ranging from Caetano Veloso, Frank Zappa and Santana to Muddy Waters, Al Green and Serge Gainsbourg. His subsequent four recordings for the Palmetto label had him exploring a blend of funk, jazz and soul with such stellar sidemen as organist Dr. Lonnie Smith, guitarists Mark Whitfield and David Gilmore, trombonist Fred Wesley and drummer Lenny White. In 2009, Javon was commissioned by the Syracuse International Film Festival to compose a full-length score for the Alfred Hitchcock film, “The Lodger,” a silent movie based on the hunt for Jack the Ripper. The original score had its debut at the festival, performed live by Jackson’s band (featuring pianist Manasia) at the film’s screening on October 2010.

In 2012, the saxophonist released a potent tribute to a towering influence, Celebrating John Coltrane, his inaugural release on his Solid Jackson Records which featured the venerable drummer and former Coltrane collaborator Jimmy Cobb. He followed later in 2012 with Lucky 13, which featured the great soul-jazz keyboardist Les McCann and included a mellow instrumental rendition of Stevie Wonder’s “Don’t You Worry ‘Bout a Thing” along with a version of McCann’s 1969 hit, “Compared to What.” That same remarkably productive year, Jackson was the recipient of the prestigious Benny Golson Award from Howard University in Washington, D.C. for recognition of excellence in jazz. Jackson’s debut on the Smoke Sessions label, 2014’s Expression, was a live quartet recording from the Smoke Jazz & Supper Club in Upper Manhattan. For You is his third album for his Solid Jackson Records label.

Jackson finished his undergraduate degree and obtained a master’s degree from the State University of New York at Purchase, where also taught. In 2013, he accepted the position of director of the Jackie McLean Jazz Studies Division at the University of Hartford’s Hartt School of Music, Theatre and Dance.