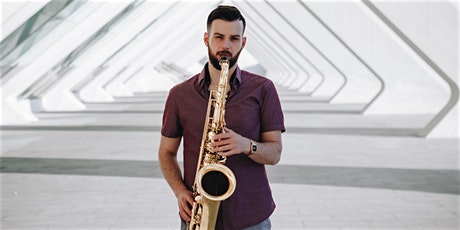 The Mike Casey Trio will perform at the Side Door Jazz Club.  $30.00

New York based, Hartford trained saxophonist Mike Casey is a melody poet. The story-telling songwriter, producer, and sonic alchemist is a multi-talented force whose soul stirring saxophone sound and inventive use of phrasing reaches out with love and embraces your musical desires, one note at a time. He has recorded 2 live albums at The Side Door and returns for his first Connecticut show in over a year in a half, after returning from a yearlong master’s program at Berklee’s Valencia campus in Spain to celebrate his first studio album, “Law of Attraction”.

Bringing the joy of jazz across genre lines to a diverse audience around the world, Mike’s music passed 4 million plays in the first 3 years of his recording career (against all odds, without a record label or a team – an anomaly in the genre). On a mission to be a passionate vessel for “jazz” in the 21st century, his searing sound, always aiming to connect emotionally with storytelling, demands the attention of the listener.

This is not your parent’s elevator music.

“I’m not interested in sizzle over substance,” he says. “Improvising, or as I like to think of it, spontaneous composing, is not about displaying skill for ego’s sake. I aim to deliver each musical statement with power, honesty, and passion to connect with audiences.”

Since 2017, Mike has garnered press from the likes of Huffington Post, Forbes, Downbeat, DJBooth, Radio Primavera Sound, Jazz in Europe, Music Ally, Evernote, Nerdist, “40 Under 40” by Connecticut Magazine, and even created the first ever sax sample pack with industry leading sample company Splice, reaching over 1 million music producers on their platform.

Despite his quick global growth, Mike felt that it was time to go back to school to improve and explore.

Yearning for something new, he ventured overseas, one of 31 selected for Berklee’s graduate program in Contemporary Performance and Music Production at their new Valencia Spain campus. In addition to packed debuts at some of Europe’s top jazz venues in Spain and France, while at Berklee Valencia he was fortunate to study with versatile artists such as Victor Mendoza, Javier Vercher, Gary Willis (Tribal Tech/Wayne Shorter 80s quartet) whilst beginning to hone new skills in Ableton Live, mixing, cross cultural rhythms, production and experimenting with styles of music from around the globe, from India to Peru.

His master’s thesis “Fusion Explorations from a Jazz Perspective” conjured fresh new original compositions (to be released in 2021) and an approach for a cross genre, cross cultural look at where jazz fusion could go next, fusing seemingly disparate ingredients from styles around the globe together – whilst preserving jazz’s deep commitment to spontaneity and risk.

While studying at Berklee, he executive produced a remix project “Surprise! The Remixes”, working with producers including Emmy winning Apple Juice Kid to re-imagine cuts from his first two live albums (Stay Surprising & The Sound of Surprise, both recorded live at The Side Door in 2016’s live show) in a variety of hip hop styles, tapping into his former DJ roots and hip hop obsession as a teenager.

Mike has enchanted a diverse audience around the world, performing with a formidable sound that commands the attention of the listener. Mike loves to pose musical “questions” to the audience, keeping them engaged, inquisitive, and above all, FEELING.