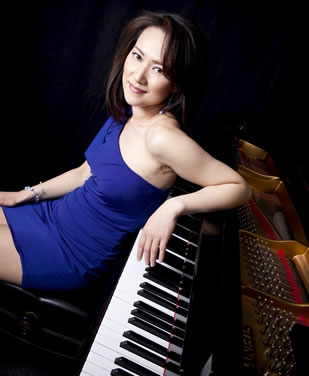 TWO SHOWS — 7:00PM & 9:00PM — Tickets @ (203) 346-2000
Internationally acclaimed pianist/composer Yoko Miwa is one of the most powerful and compelling performers on the scene today. Her trio, with its remarkable telepathy and infectious energy, has brought audiences to their feet worldwide. Their 2021 release Songs of Joy received wide acclaim and reached #1 on national jazz radio charts. Jazziz called it “a radiant new collection.” Her 2019 CD, Keep Talkin’, showcases Miwa’s fine playing and artful compositions and the trio’s uncanny musical camaraderie. DownBeat gave the recording four stars, calling it “a beautifully constructed album” and noting “the drive and lyricism of a pianist and composer at home in bebop, gospel, pop, and classical.” For more than a decade Miwa’s trio has played regularly at major jazz clubs in their home city of Boston, as well as venues around the world. A favorite of Jazz at Lincoln Center, Miwa was chosen to play on “Marian McPartland & Friends,” part of the Coca-Cola Generations in Jazz Festival. Miwa also appears regularly at New York’s famed Blue Note Jazz Club as well as Birdland and has performed and/or recorded with a wide range of jazz greats including Sheila Jordan, Slide Hampton, Arturo Sandoval, George Garzone, Jazzmeia Horn, Jon Faddis, Jerry Bergonzi, Esperanza Spalding, Terri Lyne Carrington, Kevin Mahogany, John Lockwood and Johnathan Blake, among others.