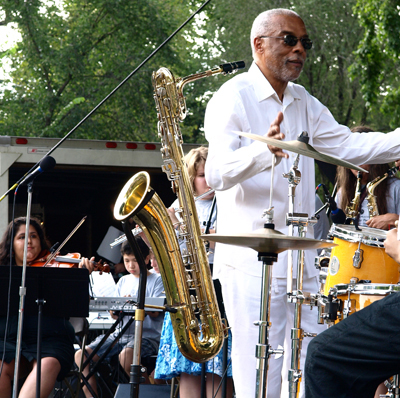 Jazz Haven is committed to our youth and families. Jazz Haven promotes jazz by community outreach to young people, from first grade through college. Youth groups are featured at every New Haven Jazz Festival.

Jazz Haven promotes collaboration with the Neighborhood Music School by encouraging and arranging for Festival performers to serve as clinicians at the School’s Summer Jazz Program. The students from Neighborhood Music School’s Summer Jazz Program have appeared at the New Haven Jazz Festival twice with their “Big Band”, in 2009 directed by internationally acclaimed saxophonist Hamiet Bluiett featuring his “Suite for Young People” and in 2010 by arranger Rex Cadwallader.

Students of all ages, from six to 21, from many of our local schools are prominently featured in all of our summer Jazz Festivals. Our most recent 2014 Festival was led by the High School In The Community band, under the direction of Nate Trier. Our 2014 Festival was kicked off by two bands from New Haven’s Neighborhood Music School.  High School In The Community and Coop High School bands from the New Haven Public Schools were featured during the 2012 Festival.  In 2011 the Ryan Sands Quartet, a group of very talented high school age musicians, kicked off the Festival on the Green. At the 2010 Festival, the Artists Collective Youth Orchestra of Hartford appeared under the direction of saxophonist/arranger/composer Rene McLean. And in 2009, students from the Saint Thomas Day School’s “First Grade Jazz“ program read and choreographed their own poetry to jazz.

Jazz Haven has provided an eight-week session each semester at the Betsy Ross Arts Magnet School. This program introduces the students to jazz and scat and the students appear in the school’s concerts and is now part of the school’s curriculum. Vocalists Aleta Staton and Giacomo Gates and drummer Jesse Hameen II have been commissioned by Jazz Haven to work with these New Haven Public Schools students.