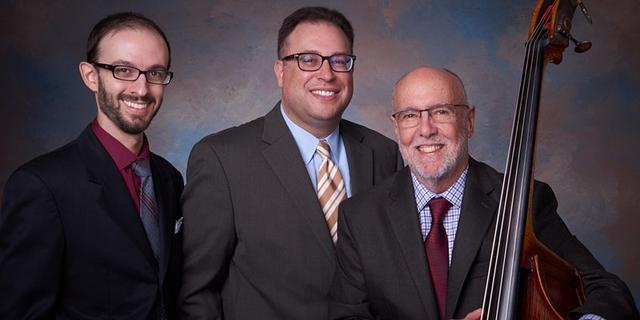 “Jeff Fuller and his trio are absolutely “happenin’ ” on his newest recording, “Happenstance”.  Each composition and arrangement is beautifully executed by the trio, with sophistication and modernism.  Fuller’s bass lines, as always, are brilliantly crafted as well as his masterful soloing. Indeed, I thoroughly enjoyed this record! “

Whether performing on stage and in clubs, teaching jazz and coaching ensembles, or composing and arranging in his home studio, Jeff Fuller brings great joy and a wealth of knowledge and experience to all his musical endeavors.

An integral part of the Connecticut, New York and international jazz scenes, Fuller has toured worldwide and recorded with saxophonists Lou Donaldson and Paquito D’Rivera. He has played with jazz masters from all styles and eras including such diverse artists as Dizzy Gillespie, Mose Allison, “Papa” Jo Jones, Gerry Mulligan, and Clark Terry. Fuller is one of the most sought after jazz bassists in Connecticut, and currently leads his own ensembles in many venues. In 2014, he was presented with the annual Jazz Haven Award, “For all you have done in presenting and preserving the culture and music of jazz.” Fuller plays a custom-made Upton Concord double bass, and a Ken Smith 6-string bass guitar.

Fuller has wide experience in both Afro-Cuban and Brazilian music. He has toured with Paquito D’Rivera’s New York/Havana Quintet, the Hilton Ruiz Quintet, Daniel Ponce’s Jazzbatá and Orlando “Puntilla” Rios’ Nueva Generación. He composes and arranges for the top salsa group, Irazú, whose CDs have featured soloists Arturo Sandoval and Tata Güines. Fuller’s Latin jazz big band and combo arrangements are frequently performed worldwide and are published by 3-2 Music, the predominant distributor of written Latin jazz. He is co-leader of the popular group, Sambeleza, which features singer/pianist Isabella Mendes and guitarist Joe Carter. His earlier Brazilian jazz group, Samba Brasil, was seven-time winner of the “Best Latin” category in the Hartford Advocate Reader’s Poll.

Fuller’s trio, featuring Darren Litzie on piano and Ben Bilello on drums, has released three CDs featuring their original music: The Call From Within (2014), Shoreline Blues (2016), and Happenstance (2018). Always expanding his compositional repertoire and vocabulary, Fuller has received commissions from both the New Haven and the Hartford Symphony Orchestras and has twice received project grants from the Connecticut Commission on the Arts. He has been the recipient of multiple commissions from 3-2 Music, Florida International University, Yale University and UConn. His String Quartet was recorded by the Haven String Quartet in 2012. Fuller graduated cum laude from Yale College and received his master’s degree in composition from the Yale School of Music. He has been Ensemble Coach for the Yale School of Music Jazz Initiative since 2016. From 1995 to 2016, Fuller taught composition, jazz theory, and arranged and conducted for the jazz and classical ensembles at ACES-Educational Center for the Arts, New Haven’s arts magnet high school. He also teaches private lessons and conducts and arranges for the Premier Jazz Ensemble of the Neighborhood Music School.