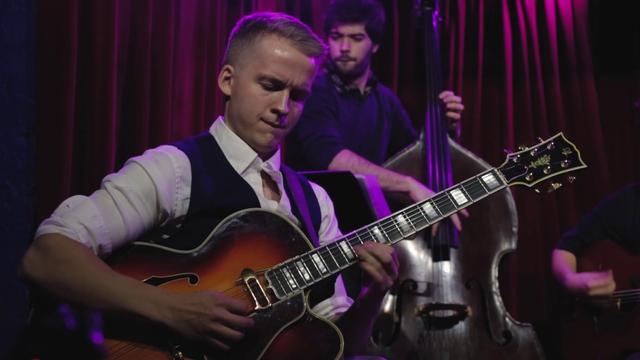 Considered one of the most gifted young guitarists in the world, Olli Soikkeli has been described by the Wall Street Journal as “a riveting Finnish guitarist who combines astonishing dexterity and speed with pure soul in a way that places him among the worthiest current day successors to the legacy of the great Django.”

Soikkeli has appeared several times at The Side Door Jazz Club as part of the Rhythm Future Quartet. This time he is leading his New York-based trio with Italian pianist Alberto Pibiri and Ethan O’Reilly on bass. The trio pays homage to the great Oscar Peterson and Nat King Cole trios.

Born in Nurmes, Finland and based in New York City, Soikkeli was introduced early in his life to the music of the legendary Django Reinhardt and Gypsy Jazz, and it has been his primary focus since. He has played in jazz clubs and festivals across Finland and toured Europe with Sinti guitarist Paulus Schäfer. Still in his 20s, Soikkeli has already played with notable artists such as Bucky Pizzarelli, Stochelo Rosenberg, Tommy Emmanuel, Andreas Öberg, Cyrille Aimee, Antti Sarpila and Marian Petrescu.

Since his move to New York City in 2014, Soikkeli has played such legendary venues such as Town Hall, Birdland Jazz Club, Blue Note and the Lincoln Center.