You are here: Home / News / BRUBECK BROTHERS IN CONCERT

Friday May 26th, 7:30PM
Corner of Temple and Chapel Streets

This is Trinity’s First Foray Into A Jazz Concert!

The Music For Music series was established three years ago at Trinity Church on the Green, New Haven, to support its unique and historic music program, To date, the series has raised over $100,000. One hundred percent of all monies over costs, including Patron Support (http://trinitynewhaven.org/brubeck-brothers/) goes to support over 40 youth singers in the program.

This concert will feature the seldom played choral jazz composition written by the legendary Dave Brubeck, the father of two of the Brubeck Brothers. It was written in 1976 and this performance at Trinity is a rare event!

Additionally the entering audience will be welcomed by the young musicians of the Neighborhood Music School Premier Jazz Ensemble.

The Brubeck Brothers Quartet is an exciting jazz group featuring two members of one of America’s most accomplished musical families, Dan Brubeck (drums) and Chris Brubeck (bass & trombone). Guitarist Mike DeMicco and pianist Chuck Lamb complete this dynamic quartet. They have performed at concert series, colleges, and jazz festivals across North America and Europe including the Newport, Detroit, Ravinia, Las Vegas, Sedona, Spokane, and Monterey Jazz Festivals. Their hour long concert at Sierra Nevada Brewery has been broadcast on the nationally syndicated program “Sierra Center Stage”. The BBQ was chosen to kick off the New Year with an hour long, coast-to-coast live broadcast on “Toast of the Nation” on National Public Radio. Their new Koch release, Classified, has already earned this rave review from All About Jazz: “Once again the BBQ attains that rarefied level where music is both relaxed and expressive, and their joy in its creation is contagious. There’s really nothing out there that comes close to their unique brand of inventiveness.” 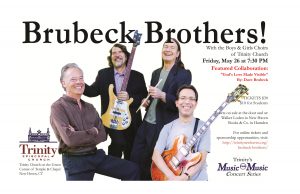 The Choir of Men and Boys of Trinity Church, New Haven, is the oldest extant Choir of Men and Boys in Connecticut, and one of the oldest in the United States. Founded in 1885, it is one of the few such choirs in continuous service since, the Choir recently celebrated its 125th Anniversary during the 2010-2011 season. As heir to a musical tradition begun in the Middle Ages and carried to this country in the nineteenth century, it has distinguished itself by continuously providing high quality choral music at Trinity worship services, at the annual Christmas and Spring concerts, and in the wider community.

The Men and Girls Choir was founded in the fall of 2003, with members auditioned from all over south-central Connecticut. That first year, girls from grades 4 through 10 formed the soprano section of the Choir. The Girls of the Choir represent many towns in the greater New Haven area.

Neighborhood Music School’s Premier Jazz Ensemble is an audition only, full scholarship group bringing together the best and most dedicated young jazz musicians in the region. These musicians receive professional training at Neighborhood Music School and by performing in the community.    Under the direction of arranger and composer Jeff Fuller, the ensemble includes All-State high school jazz musicians and seasoned adults alongside each other. The group plays in a wide variety of jazz styles, including bebop, swing, Brazilian and Afro Cuban jazz.

In the past, the group has included great young musicians who have gone on to successful careers in music, including Grammy nominee Christian Sands.  The group was featured at the 2016 New Haven Jazz Festival, and has performed at numerous area events and venues, including the annual Cherry Blossom Festival and the Whitney Center concert series.